What to do in La Cienaga de Zapata

What to do in La Cienaga de Zapata

A vast, virtually uninhabited swampy wilderness spanning the entirety of southern Matanzas, the 4520-sq-km La Cienaga de Zapata quickens the pulses of wildlife-watchers and divers alike with the country’s most important bird species and some of the most magical offshore reef diving secreted in its humid embrace. Most of the peninsula, a protected zone now part of Gran Parque Natural Montemar, was formerly known as Parque Nacional Cienaga de Zapata: in 2001, it was declared a Unesco Biosphere Reserve.

The sugar-mill town of Australia in the northeast of the peninsula marks the main access point to the park. Near here is one of the region’s big tourist money-spinners, the cheesy yet oddly compelling Boca de Guam& a reconstructed Taino village. The road hits the coast at Playa Larga, home to the peninsula’s best beaches, at the head of the Bahia de Cochinos where propaganda billboards still laud Cuba’s historic victory over the Yanqui imperialists in 1961.

Ornithologists and nature lovers will want to veer southwest from here, where the sugarcane plantations fade fast into sticky swamp. This is one of the remotest regions of Cuba, rarely penetrated by tourists. Yet intrepid visitors will reap the benefits: an incredible diversity of birds, as well endemic reptile and plant species, can be glimpsed on the mangrove-flecked waterways here. Aside from its reputation as a proverbial banana-skin for US imperialism, the east coast of Bahia de Cochinos also claims some of the best cave diving in the Caribbean and southeast of Playa Larga the dive sites fan out temptingly, accompanied by a couple of less riveting resort hotels. Accommodations outside of the resorts, however, are thankfully abundant. You can check out excellent options in Central Australia, Playa Larga and Playa Giron. At last research, the Viazul bus through the peninsula had been reinstated after a brief hiatus. There’s also a handy shuttle service between Boca de Guama and Caleta Buena. 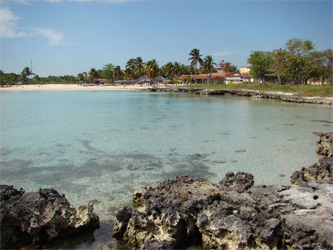 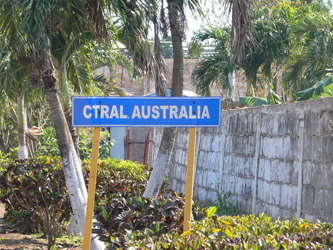 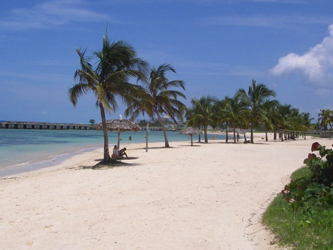 No, you haven’t just arrived Down Under. About 1.5km south of the Autopista Nacional on the way to Boca de Guam& is the large disused Central Australia sugar mill, built in 1904.

Museo de la Comandancia (MUSEUM )
(admission CUC$1, 9am-5pm Tue-Sat, 8am-noon Sun)
During the 1961 Bay of Pigs invasion, Fidel Castro had his headquarters in the former office of the sugar mill, but today the building is devoted to this revolutionary museum. You can see the desk and phone from where Fidel commanded his forces, along with other associated memorabilia. Outside is the wreck of an invading aircraft shot down by Fidel’s troops. The concrete memorials lining the road to the Bahia de Cochinos mark the spots where defenders were killed in 1961. A more moving testimony to the Bay of Pigs episode is the Museo de Playa Gitlin.

Finca Fiesta Campesina (WILDLIFE RESERVE)
(admission CUC$1, 8 9am-6pm)
Approximately 400m on your right after the Central Australia exit is a kind of wildlife-park-meets-country fair with labeled examples of Cuba’s typical flora and fauna.

The highlights of this strangely engaging place are the coffee (some of the best in Cuba and served with a sweet wedge of sugarcane), the bull-riding and the hilarious if slightly infantile games of guinea-pig roulette overseen with much pizzazz by the gentleman at the gate. It’s the only place in Cuba — outside the cockfighting — where you encounter any form of open gambling.

Laguna del Tesoro (LAKE)
This lake is 5km east of Boca de Guama via the Canal de la Laguna, accessible only by boat. On the far (east) side of the 92-sq-km body of water is a tourist resort named Villa Guarna, built to resemble a Taino village, on a dozen small islands. A sculpture park next to the mock village has 32 life-size figures of Taino villagers in a variety of idealized poses. The lake is called `Treasure Lake’ due to a legend about some treasure the Taino supposedly threw into the water just prior to the Spanish conquest (not dissimilar to South American El Dorado legends). The lake is stocked with largemouth bass, so fishers frequently convene.

Criadero de Cocodrilos (CROCODILEFARM )
(adult/child incl drink CUC$5/3; a 9:30am-5pm)
Inside the Guarna complex near the Villa Guama departure dock, the Criadero de Cocodrilos farm breeds crocodiles — although the fenced-off lake seems barely more authentic than the Taino village. Lots of crocs languish about; there are other caged animals here. It used to be possible to visit the nucleus of this breeding program just across the road from the crocodile farm, run by the Ministerio de Industries Pesqueras. Two species of crocodiles are raised here: the native Crocodylus rhombifer ( cocodrilo in Spanish) and the Crocodylus acums ( caiman in Spanish), which is found throughout the tropical Americas. Tourism is not encouraged, however, and security guards will point you back across the road to Boca de Guam& faux farm. On your right as you come from the Autopista, the Criadero de Cocodrilos is a breeding facility, run by the zoo. Prior to the establishment of this program in 1962 (considered the first environmental protection act undertaken by the revolutionary government), these two species of marsh-dwelling crocodiles were almost extinct. The breeding has been so successful that across the road in the

Boca de Guama complex you can buy stuffed baby crocodiles or dine, legally, on crocodile steak. If you buy anything made from crocodile leather at Boca de Guam& be sure to ask for an invoice (for the customs authorities) proving that the material came from a crocodile farm and not wild crocodiles. A less controversial purchase would be one of the attractive ceramic bracelets sold at the nearby Taller de Ceramica ( 9am-6pm Mon-Sat) where you can see five kilns in operation.

Gran Parque Natural Montemar
The largest cienaga (swamp) in the Caribbean, Cienaga de Zapata is one of Cuba’s most diverse ecosystems. Crowded into this vast wetland (essentially two swamps divided by a rocky central tract) are 14 different vegetation formations including mangroves, wood, dry wood, cactus, savannah, selva and semideciduous. There are also extensive salt pans. The marshes support more than 190 bird species, 31 types of reptiles, 12 species of mammals, plus countless amphibians, fish and insects (including the insatiable mosquito). There are more than 900 plant species here, some 115 of them endemic. It is also an important habitat for the endangered monad (manatee), the Cuban cocodrilo (crocodile; Crocodylus rhombifer ) and the manjuari (alligator gar; Atractosteus tristoechus ), Cuba’s most primitive fish with an alligator’s head but a fishlike body. The almost-extinct dwarf hutia (a kind of wild guinea pig) has the swamp as its only refuge. The Zapata is the best bird-watching spot in Cuba: the place to come to see zunzuncitos (bee hummingbirds; the world’s smallest bird), cormorants, cranes, ducks, flamingos, hawks, herons, ibis, owls, parrots, partridges and tocororos (Cuba’s national bird). There are 18 birds endemic to the region. Numerous migratory birds from North America winter here, making November to April prime bird-watching season. It’s also the nation’s number-one nexus for catch-and-release sportfishing and fly-fishing, where the palometa, sabalo and robalo, as well as bonefish, thrive.

Communications in Zapata, unsuitable for agriculture, were almost nonexistent before the Revolution when poverty was the rule. Charcoal makers burn wood from the region’s semideciduous forests, and turbo (peat) dug from the swamps is an important source of fuel. The main industry today is tourism and ecotourists are arriving in increasing numbers. Public transport only runs as far as Playa Larga: To see all the options of the bog will have to organize a tour with LACIENGADEZAPATA.com, or once there through specialists who organize such activities.

There are four main excursions into the park, with an understandable focus on bird-watching. Itineraries are flexible. Transport is not usually laid on; it’s best to arrange beforehand. Cars (including chauffeur-driven jeeps) can be rented from Havanautos (ark here) in Playa Giron; bank on between CUC$25 and CUC$40 for car and driver. You can hire an experienced fisherman in LACIENAGADEZAPATA.com, or once there, aspiring fishers can arrange fly-fishing from canoes or (due to the shallowness of the water) on foot at either Las Salinas or Hatiguanico. Ask at Cubanacan’s La Finquita office or just turn up if you have your own gear. Between them the two locations offer Cuba’s best angling: Las Salinas has excellent fishing; Hatiguanico is great for Tarpon.

Laguna de as Salinas (BIRD-WATCHING)
(per person CUC$10)
One of the most popular excursions is to this Laguna where large numbers of migratory waterfowl can be seen from November to April: we’re talking 10,000 pink flamingos at a time, plus 190 other feathered species. The first half of the road to Las Salinas is through the forest, while the second half passes swamps and lagoons. Here, aquatic birds can be observed.

Guides are mandatory to explore the refuge. The 22km visit lasts over four hours but you may be able to negotiate for a longer visit. It’s strongly recommend the hiking photographic activity, is the ideal way to ensure the fullest experience.

Observacion de Aves (BIRD-WATCHING)
(per person CUC$19)
This trip offers an extremely flexible itinerary and the right to roam (with a qualified park ornithologist) around a number of different sites, including the Reserva de Bermejas .

Among 18 species of endemic bird found here you can see prized ferminins, cabreritos and gallinuelas de Santo Tomas — found only on the Peninsula de Zapata.

Rio Hatiguanico (BIRD-WATCHING)
(per person CUC$19)
Switching from land to boat, this excursion takes you on a three-hour 12km river trip through the densely forested northwestern part of the peninsula. You’ll have to duck to avoid the branches at some points, while at others the river opens out into a wide delta-like estuary. Birdlife is abundant and you may also see turtles and crocodiles. You’ll need to hire transport to get you the 90km to the start point.

Santo Tomas (OUTDOORS)
(per person CUC$10)
It’s also worth asking about this trip, an excursion that begins 30km west of Playa Larga in the park’s only real settlement (Santo Tomas) and proceeds along a tributary of the Hatiguanico — walking or boating, depending on the season. It’s another good option for bird-watchers.